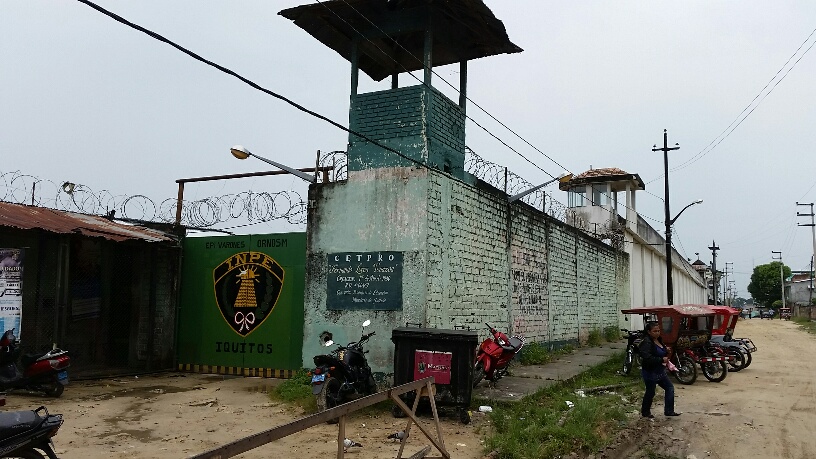 We stepped out of the motokar right in front of the steel door with a giant padlock on it. Beside it stood a guard with really big gun. Alex, my translator, stepped up to the guard talked for a few minutes, a call over the radio and the key came out. All cell phones, cameras or any other electronic devices had to be left with a street vendor who would collect a few soles for storage. After checking our ID’s we stepped into a small wooden room that resembled an outhouse with a front and back door. The guard did a pat down that made TSA look the JV team. I thought I had taken care of everything in my pockets then the guard took my belt. I guess he thought I might hang myself.

Last time I was in Iquitos I became friends with the only gringo motokar driver in Iquitos, Tom. Tom apparently was hiding out in Iquitos from a drug charge in the Netherlands. That is until Interpol found him in this jungle outpost and threw him in the slammer. He has been in prison for 10 months waiting extradition back to Europe.

Since Tom is a friend and I’m here to serve people, who better to serve then a friend. I have to admit I was also very interested in seeing the conditions inside a South American prison, not that I plan on staying long. After doing some research I had brought a few things I knew would be welcomed, ceviche, fruit, nuts and some reading material.

After being molested by the guard, I stepped over to the counter and handed him my passport which was filed under number 194 and I was handed a metal tag. Then with a black magic marker they wrote 194 on my arm, along with T5 (the barrack that Tom resided in) and then I got a couple additional stamps on both arms. I felt like I was USDA approved prime meat and just hoped the prisoners wouldn’t think the same thing.

A prison orderly grabbed our bounty as we followed across the yard. Under a tin roof there were a couple of wooden chairs and tables that acted as the courtroom. We weaved our way through several buildings until we reached T5.

As we entered it looked like a subset of the local market with only males. Men of all ages and sizes milling around, some working on handicrafts, small purses, sandals, paper Mache lamps, not a guard to be seen anywhere. A small lunch counter with sodas and sandwiches was in the middle of the room.

Guys were shoving little packs of gum in my face hoping I would stop long enough to make a purchase. We continued our way until the orderly screamed out Davidson! A few minutes later he appears in the doorway, obviously happy to see a familiar face. As he scarfed down the ceviche he filled me in on how he had been railroaded and was totally innocent, the battle cry of every prisoner.

Here I am wondering if one of these guys might have a shank then I look around and see scissors on the table and a guy hacking up chicken with a meat cleaver.  It was really strange merging in with a bunch of convicts complete with weapons. Tom’s wife brings in material for making sandals which he works on during the day. He gives her the finished product and she sells them on the street. A lot of the prisoners were making handicrafts for sale to raise money for life inside and outside the prison.

If you want anything inside the prison beside the standard gruel and a bunk it requires money. Tom showed me one room that was smaller and much more spacious which had an entry fee of S/1500 ($500). Just like in the US, money can buy anything, even in prison.

Each day at 8am the guards do a prisoner count, then everyone is free to roam around until they do another count at 2pm, at 4pm the cell block doors are locked, 8pm is the last count and then all prisoners are locked in their rooms. Each dormitory style room had wall to wall bunks with barely enough space to walk between them. Tom doesn’t have a bunk, just a thin mattress the he rolls out on the floor each night.

I asked Tom if there were any beatings, rapes or general violence among prisoners. “Naw these guys are a bunch of pusses” he responded, not an exact quote but close in enough for a G audience. He did say there was a lot of homosexual activity, even though wives are allowed in and for S/5 you can rent a private room for an hour. Some guys get to enjoy their wife’s company with just a sheet covering them. I noticed some inmates had a black A on their arm indicating they had Aids, the prison version of the scarlet letter.

Visiting time was almost over and we had one more stop to make, the woman’s prison next door. I had heard there was one gringa, a German girl, in the woman’s prison so I also brought food and reading material for her. I had brought some cheese that had a spice covering on the outside of the cheese which threw the guards into a confused state. They thought it was some sort of drug we were sneaking in and they kept picking pieces off and tasting it until I finally showed them that we could trim off the outer crust of the cheese and everything was cool.

We followed a very similar experience on the woman’s side. We didn’t have much time left so the guards went to fetch, Claudia. Of course she had no idea who we were or why we were there when she walked into the room. The guards had told us she had been there for 2 years and nobody had come to visit. When she learned who we were and what our mission was the biggest smile you can imagine broke across her face.

She was also in prison for drugs and the same prison battle cry. She is facing an additional 4 years. I hated that we didn’t have more time to visit but our time was up and as we walked out I turned to see a woman who was no longer a prisoner in my eyes just a young girl beaming with joy. Another grateful day in Iquitos.

Iquitos is the largest city in the world with no road to it, you can only…

Today, after two days of the Iquitos runs and weight loss program, I got…

We arrived in Iguazu and our driver was waiting. As we drove up to the…