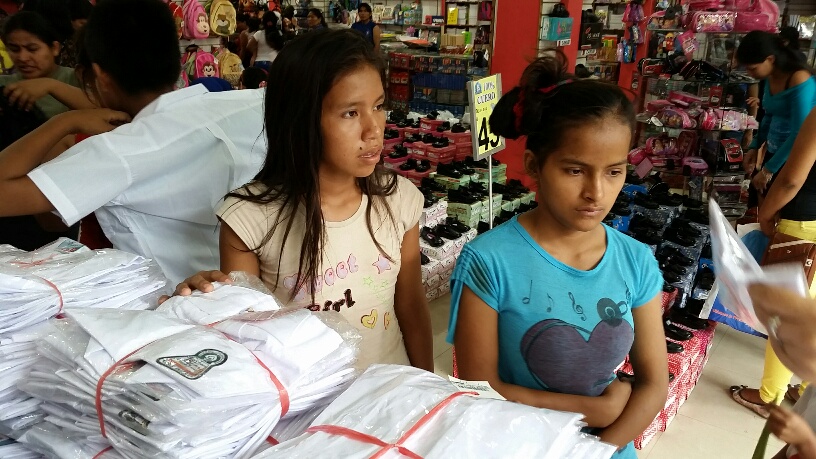 I stepped into the metal box that Rita and her six children call home, the baby was screaming because he is covered with scabs from Chicken Pox. The room is sweltering, no air con or fans here. Again the shelves are bare, the kids are in rags. Maria’s shirt looked like it belonged on a five year old and she is thirteen. On the front it spoke a real truth, “Sweet Girl”.

But today our mission was different, since we are below the equator the kids are just finishing up their summer break. Like every parent that means it’s time for school shopping, even for the poorest of the poor. School is free in Iquitos, the only problem is that you have to have a uniform and buy all your own school supplies, the opportunity wall that prevented Ruth and Maria from going to school for the years. Lou and I have sponsored them since their first day in school and I saw last year’s report card, all “A”s.

Ruth just graduated from primary school (she is 16) and going into what would be equivalent of the 6th grade. Maria is in her last year of primary school (she is 13) and this will be Celeste’s (5 years old) first year in school. I enlisted the help of Paul’s nurse Camila because a man walking around Iquitos with young girls by yourself is like wearing a neon sign that says “Child Molester”. There is a sign on the main boulevard in the center of town that says “ Aqui se castiga la explotacion sexual infantil, tener sexo con menores del edad se page con carcel” (Here the sexual exploitation of minors is punishable by prison).    This is a town full of the despites, creeps and low lives.

Unfortunately me doing school shopping for a couple of young ladies is like trying to get a dog to do the ballet. I’m a fish out of water when it comes to shopping for girls in a city that is a maze of stores where everyone speaks a different language, particularly when then needed under garments, not my department.

So off we go to the school store, the streets a bustling with people and motokars going everywhere. You have to maintain a constant vigilance in Iquitos, if you don’t get run over by a motokar you can step in one of the pot holes in the sidewalk every few feet. Lou and I were walking last week on a wooden boardwalk that was probably 30 feet off the ground, every twenty feet or so a board was missing. One wrong step and you would have been a goner.

This becomes particularly dangerous when there is a torrential downpour which covers all the potholes. I have a friend who was walking down the street after one of those rains and stepped in a drainage hole that had no cover. As he went down into the hole which would have flushed him down into the drainage system and almost certain death, he stuck out his arms and barely caught the sides of the hole. He pulled the muscles in both shoulders but survived another Iquitos road hazard.

I was surprised how Ruth and Maria headed down the street with Celeste trying to keep up. Many times I would look around in a panic because I lost sight of the toddler who was following the best she could but still a midget in a world of giants. They seemed to not even concerned that we would lose Celeste in the crowd for a few minutes and then you would see her little red shirt among a sea of legs running to catch up, dodging people and motokars like a little pro.

There are stores that specialize in the school uniforms. Stacks of white shirts and blouses, grey skirts and pants. It was a quick process, no dressing room necessary. Pull out a blouse, put it on over your shirt, pull up the skirt over your pants. If it fits, we’re done. No shoe store necessary for the black patent leather shoes, just sit in the plastic chair on the street corner, while the vendor fits you people are streaming past you.

Today, after two days of the Iquitos runs and weight loss program, I got…