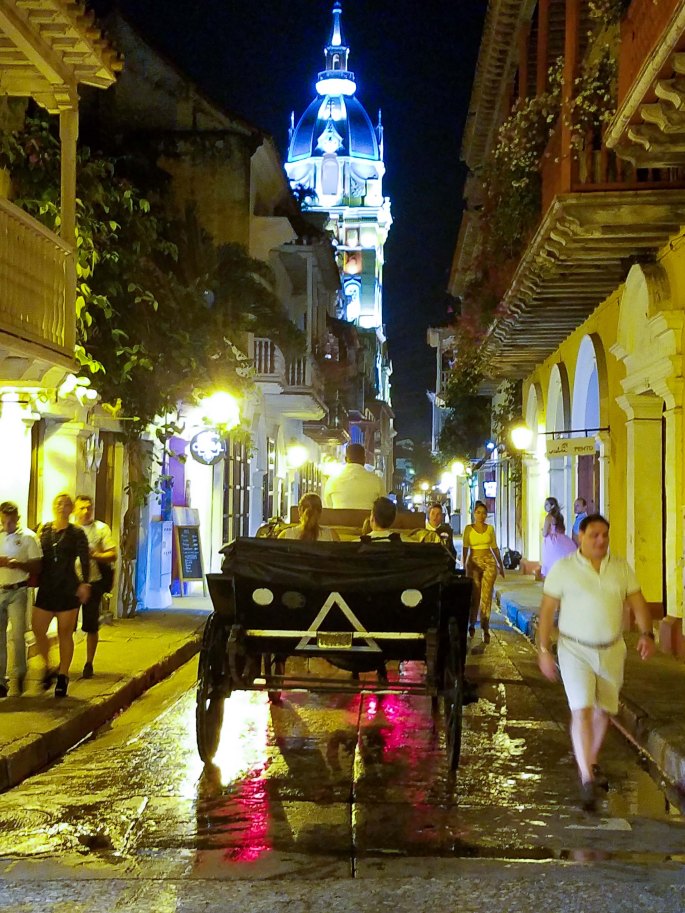 When we first told people we were going to Colombia we got a lot of strange looks and some people came right out and said “are you crazy, it’s dangerous in Colombia”. But I had done my homework and what was once a country that was run by the drug cartels and recently rocked by guerrilla groups like FARC and the ELN has changed dramatically in the last few years. This once tumultuous country has regained its footing and Colombia is open for business.

Cartagena, a northern city on the Caribbean coast, was once the main port for the Spanish Conquistadors to send their bounty of gold, spices and slaves back to Spain.  This made it a target for adversaries and pirates, so a walled fort was built in 1796 to protect the city. Today the historic city is surrounded by 7 miles of the imposing stone walls and the old wall acts as a walking plaza for lovers, tourists and locals.

Old Town assaults your senses with sounds, smells and colors that engage every part of your body. Horse drawn carriages rolling over cobblestone streets, hooves clicking on the stones, vendors singing out in their call for customers, impromptu musicians playing to pass the hat. The smell of street vendors cooking Arepas de queso , Empanadas and Bollos, fruit vendors rolling their carts around town. The brilliant colors of Bougainvilla cascading off balconies of the pastel colored homes. Old Town comes alive each evening with the charm of a romance novel.

We wanted to experience the culture of the city so we found a guide, Alex Rocha, to show us the “real” Cartagena which was fascinating. First you have to understand that Cartagena is made up of six levels of neighborhoods, level 1 being the poorest and level 6 the most wealthy.

The first stop with Alex was in his own neighborhood which is a level 2. As we drove into the neighborhood we were confronted with America’s favorite pastime, baseball. The whole neighborhood was out watching the local baseball teams playing in an open field with a homemade baseball. A level of community gathering rarely found in the US.

After stopping by his home we checked out the local market where we had our street food tasting, including street meats, some of which I didn’t really want to know the name of including grilled pig’s blood.  Smoothies made from uchuva, lulo, guanabana completed our culinary street experience.

Next stop, a local domino game. We found many spots where the locals just sat outside their homes, a small table with four slamming domino pieces down during a hotly debated game. Our last stop is a community just outside the walls of the Old Town, Getsemani. Once a hotbed for crime and drugs this community has transformed into a destination for hostels and nightclubs. The graffiti wall art tells the history of this unique neighborhood. A great place to plant yourself in one of the plazas and watch the locals.

The nightlife in Old Town and Getsemani all about the salsa. To hang in this town you better be able to shake your hips and move your feet. The best places we found were a small bar called Cuba on the corner of the San Diego plaza and Havana a club that is on the border of Getsemani.

We also used Alex’s son, Chris, to take us to Playa Blanca, a really beautiful beach. It was pretty crowded but Chris got us a water taxi to whisk us to a part of the beach without many people. We spent the day enjoying the sun and Club Colombia’s (a local cerzeva). We had one of the best meals we had in Colombia at a small restaurant, a whole snapper with fried plantains and local fruits.

La Cevicheria (http://www.lacevicheriacartagena.com) – a great little restaurant right off the San Diego plaza with indoor and outdoor seating. Recently featured on Anthony Bourdain’s No Reservations, we had some of the best ceviche and paella of our trip here. We were pleasantly surprised when they put down the Paella for two that was topped with a whole lobster, mixed in shrimp, octopus and calamari, delicioso! This paella rivaled some of the best I have ever had, even my own.

Restaurante 1621 – Recently rated the best restaurant in Colombia, this eatery is in the center of a garden hotel. The setting is beautiful at night, candles and tables set in the middle of a garden. The food and service were excellent. The price was a bit steep but the perfect place for a romantic evening out in Old Town.

Sinko Bar (https://www.facebook.com/SinkoBarCartagena/) Tastefully decorated and a nice staff, again we tried the seafood for two, grilled shrimp and octopus along with some fried shrimp, calamari and fish cakes. This was truly an enjoyable meal and another Cartagena experience.

Don’t be afraid to stroll around Getsemani and try the street food, empanadas, grilled chicken, arepa de queso were all delicious. The fresh squeezed mandarin orange juice was some of the best juice I have ever had.

Cuba 1940 (https://www.facebook.com/cuba1940/?ref=page_internal) We didn’t try the food here but loved the mojitos and the salsa band. A small swimming pool is situated right in front of the band, complete with pillows that you can sit on and dangle your feet in the water. Cool vibe and fun to join in on some salsa. No cover, the band starts at 9pm.

Café Havana (http://www.cafehavanacartagena.com) – This place was loads of fun but didn’t start cranking until about 12am. Both bands we watched were awesome, lots of salsa and fun people. Good mojitos but no food here. There is a $10/pp cover and the band starts at 11pm.

We arrived in Iguazu and our driver was waiting. As we drove up to the…

When we got back from Mendoza we headed towards the obelisk on 9 de Julio,…

Tonight I headed for Poppy’s House (the orphanage) to check on our new visitors, Annalise…