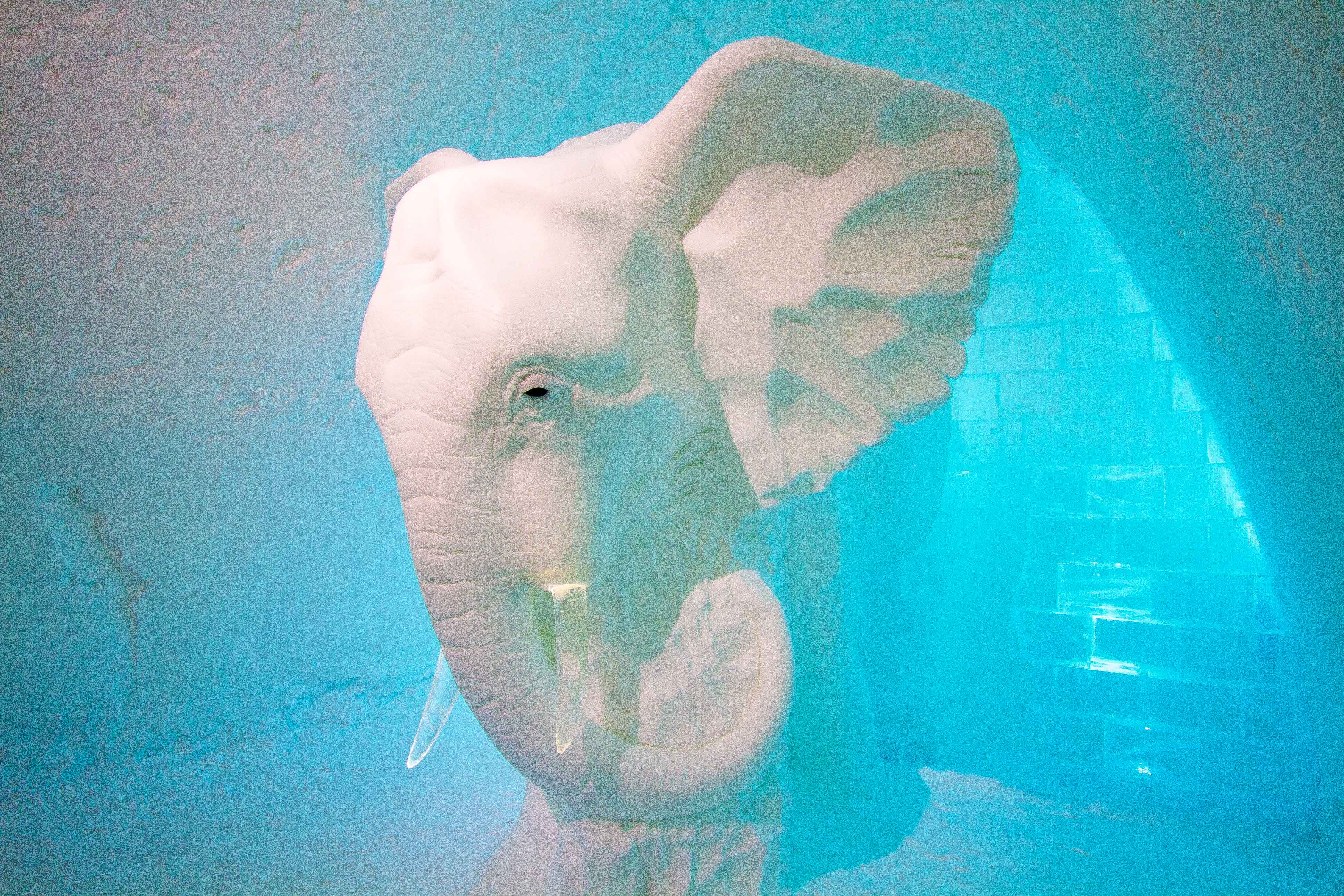 Not only cool but downright cold. Staying at the Ice Hotel has always a bucket list item for me. The idea of building a hotel that just lasts for a few months before it melts has always intrigued me. Last year as we arrived in the tiny village of Jukkasjärvi you get a real surreal feeling, the quiet darkness, even though it is the middle of the afternoon, snow falling and the temperature dipping below zero.

The hotel is separated into warm rooms and cold rooms. When you arrive at the Ice Hotel you realize that you are in a different kind of hotel. After checking in they send you to a room to get your arctic gear, polar overalls, boots, gloves and head covering. The warm rooms stay year round and resemble any other hotel room. The cold section of the hotel is created each year from ice harvested from the Torne River, the largest in Sweden the clearest river in the world. Which is why the large blocks of ice harvested each year are in demand for ice bars as far away as New York, Las Vegas and Dubai.

The ice hotel can be found in the tiny arctic village, Jukkasjärvi which is about 8 miles from the mining town Kiruna inside the Arctic Circle in northern Sweden. Temperatures in the winter can reach -22F on a regular basis, Jukkasjärvi can be 10 to 20 degrees lower temperature then Kiruna as the wind comes off the Torne River.

Ice from the Torne has the unique quality of being crystal clear.  Each year they have to rebuild the Ice Hotel from ice harvested from the previous year. Ice is cut from the Torne and stored in a large warehouse for the whole year. Each cube cut out of the Torne is about 20 square feet and weigh over two tons. The hotel takes 6 to 8 weeks to build the hotel and uses over 1000 tons of ice and over 30,000 tons of snice (a mixture of snow and ice). Extra ice from the Torne is shipped all over the world to build ice structures and bars.

The snice is blown into arching forms to make walls about 2 feet thick and give the structure the strength found in arches found in churches and bridges.  When finished the ice portion of the hotel has 50 rooms, 15 of those rooms are selected to be turned into art suites.

Artists from all over the world submit designs for the art suites, two artists are selected to design each of the art suites. Some of these artists have never worked with ice or even seen snow. One Brazilian artist that was chosen recently, left Brazil when the weather was 25C (77F) to arrive in Kiruna to a temperature of -25C (-13F). Each pair of artists are given two weeks of instruction on ice carving before they begin creating their magic.

Staying in an ice room is a unique experience. The temperature of the ice rooms stays at a consistent 20F. Most people stay several nights in the Ice Hotel but only one night in an ice room. Since there are no bathrooms, TV, electrical outlets in the ice section of the hotel, a mid-night trip to the bathroom is a very cold experience. The bathroom is in the main lodge so it means leaving the hotel, going outside in sub-zero temperatures and then back into a shared bathroom that resembles a country club locker room complete with toilets, showers, lockers and a sauna. Each person is given a small locked room to store their belongings.

The hotel is open for visitors doing tours for most of the day but is closed to the public starting at 6pm for overnight guests.  When you check in for your ice adventure they give you a tour of the facilities, a sleeping bag and a big “good luck”.

When you decide to go to your room, after hitting the ice bar to gain some liquid courage, you walk through the locker room, outside and then back into the ice hotel. A hotel made of ice is eerily quiet as the snow and ice absorbs noise. The air has a freshness that you don’t experience anywhere else. Once in the room the challenge begins, staying warm, getting sleep and keeping things dry. Keeping your things dry means only bringing things into the ice room that you are going to need to sleep.

We utilized a base layer of long underwear, a warm toboggan and two pairs of warm socks. The sleeping bag they give you is rated for sub-zero weather and is the cocoon type that goes over your head. It is important to create some air between your body and the sleeping bag to create warmth. Of course we carried extra clothing if needed in the middle of the night.
I can’t tell you that sleeping in an ice room is going to be the most comfortable night of sleep you will ever have but a night you will never forget. There isn’t a lot of sitting around lounging in 20 degree weather in your long johns but it is an amazing experience. In the morning you are greeted with hot lingonberry juice and the memory of your polar experience.

If you would like to stay in the Ice Hotel, book your room early. We booked our room in August and the hotel was almost totally booked. The ice portion of the hotel opens in mid-December until March. There are four different types of ice rooms, Deluxe suites, Art suites, Northern Light rooms and Ice rooms ranging in price from $338 to $990 per night.

Deluxe Suites have a lounge and sleeping area with a frosted glass door, a three dimensional piece of art in the room. They are twice the size of the other rooms and include an ensuite bathroom and sauna, a thick spring mattress and a private changing area. All other rooms utilize shared bathroom and sauna facilities which can make for a cold trip to the bathroom in the middle of the night.

Art Suites include the masterpieces of the artists. Northern Light rooms are set up to simulate the northern lights on the ceiling and some ice sculptures and Ice rooms just give the opportunity to experience sleeping in an igloo environment. Each room consists of a bed carved out of ice with a mattress and reindeer skin on the bed. All rooms other than the Deluxe suites have a curtain for a door.

There are plenty of things to do in the Kiruna area, including observing the Northern Lights, dog sledding, snowmobiling and horseback riding. There are only two restaurants in the Jukkasjärvi area, the Ice Hotel and the Homestead (also owned by the Ice Hotel), food was good but you need to understand that nothing is cheap in Sweden.

We utilized Kiruna Guidetur www.kirunaguidetur.com for our activities and thoroughly enjoyed all the arctic activities. We were particularly impressed with their guides and level of service.