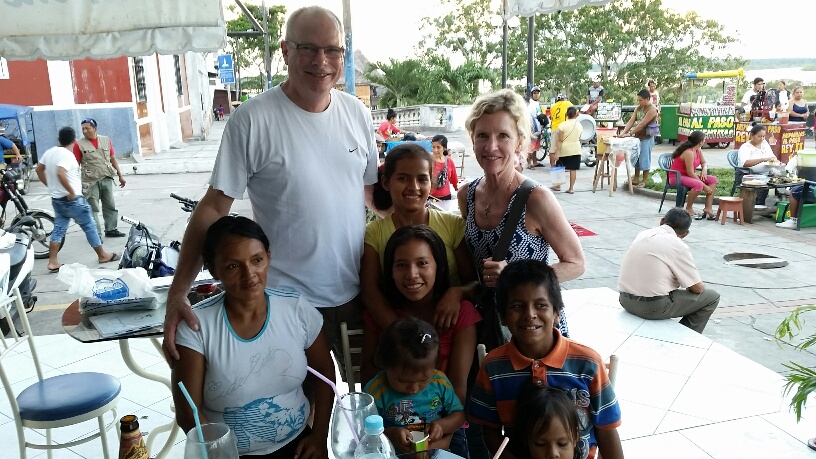 As the plane landed in my jungle home away from home the familiar images flashed beneath the plane. A lush green canopy that looks like a dark green Berber carpet that stretched as far as the eye can see, rusted tin roofs with satellite dishes pointing at the sky on the shacks below. A sense of familiarity washed over me as the wheels touched down, happy faces and a selfie with the plane, maybe their first trip from home. We grabbed our luggage and loaded into a motokar, a motorcycle with a bench attached a kind of jungle chariot, and headed towards our hotel.

At first glance not much has changed in Iquitos since I left 18 months ago, the dilapidated plane at the airport had been removed and the tarmac was not littered with oil helicopters, a byproduct of the oil prices crashing and another bust for the area but everything else was the same. The sweltering heat still slams into your face, the frenzy of motokar drivers vying for your transportation. Iquitos still assaults all of your senses, a mosaic of sounds, sights and smells that can invigorate or nauseate in an instant.

The trip from the airport always reminds me of taking a stick to dig up an ant hill to watch the ants scurrying in different directions, the streets are a hodgepodge of motokars, motorcycles, buses and a few cars all feverishly jockeying for position, ignoring all traffic laws. When the light turns green it sounds like the go cart races on a hot summer night at the beach, a barrage of engines at full throttle. It’s not unusual for a whole family to be headed down the street on one motorcycle with the mother nursing the baby while holding on to the back seat and a toddler or two in between. Motokars so loaded down with wood, appliances or scrap metal that you think the front wheel will float in the air.  Of course almost no one is wearing a helmet.

Originally Iquitos was created as a military outpost to protect Peru’s land interests from the Ecuadorian and Brazilian border battles. Even today there is a heavy military presence within the city. This jungle town has a history of booms and busts, starting in the mid-1800s shortly after Charles Goodyear patented the vulcanization of rubber in 1844 allowing rubber to be used for tires, balls and many other uses. The Amazon complete with an abundance of rubber trees became the benefactor of industrialization and this became a sleepy little jungle town’s first boom.

The cost of rubber skyrocketed and the money poured into Iquitos. Mansions were built out of imported Italian tile, champagne flowed and there are rumors that the Nuevo rich were sending their clothes to Europe to be cleaned properly. As the Europeans flowed in to claim stake to their rubber fortune, as always during the Iquitos booms they trampled the indigenous tribe’s way of life, liberty and happiness.

Unfortunately the money did not last long, an Englishman smuggled rubber seeds out of the country to be planted in the British gardens and then onto Southeast Asia. To the Peruvian’s dismay, cultivation attempts in Peru had failed because when rubber trees were planted too closely together they caught a disease that killed the plants. This problem did not exist in other areas of the world allowing farmers to plant rubber plantations lowering the cost of harvesting the latex. The rubber industry in Iquitos went bust and Iquitos slipped back into oblivion.

The next boom came when the world’s insatiable appetite for wood turned south again and aliens descended again on the local people to cut down their forests. Again the indigenous were trampled and the rich got richer. Environmentalists put a screeching halt to deforestation and now the cutting of trees is highly regulated, another boom to bust.

And then there was oil. When oil was discovered, oil companies flooded the area with their money, equipment and yes again the exploitation of another of Peru’s natural resources and its people. Now oil too has gone bust and the economy is in another tailspin.

Living in Iquitos is like jumping into a time capsule and going back 100 years with a sprinkling of the 21st century. A place full of corruption, bravado and exploration, the wild wild west of this generation. A broken city of 500,000 where poverty is at epidemic proportions, a petri dish of mixed cultures and ambitions, a city full desperados and degenerates. Iquitos is the largest city in the world with no road to it.

I love coming here because it is one of the last outposts left in this world. Most tourists come here to see the jungle or try their hand at the psychotropic jungle concoction called ayahuasca. Lou and I come for the people.

It was great to see old friends but a place like Iquitos is full of new stories of a life full of difficulties. A fire started on artesian alley and most of the Shipibo Indians lost everything. Pirates attacked the, Frio al Fuego restaurant, the nicest restaurant in Iquitos, and stole all the patrons’ money.

After some work we found Ruth and Maria but much had changed, their little sister Hilda drowned last year during the rainy season. This makes the third child the jungle has claimed of Rita’s which is not unusual in this difficult environment particularly when you are desperately poor.  They moved 10 miles away, to Santa Thomas to get away from the river. Now a family of six is living in temporary government housing which is nothing more than row after row of tin boxes each with two small rooms. 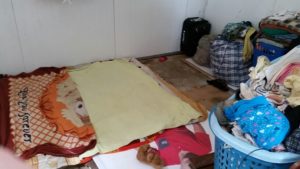 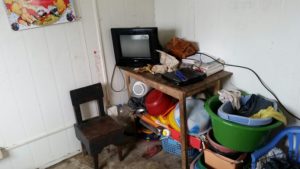 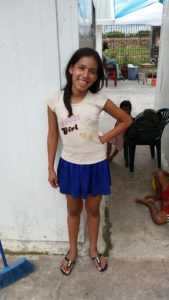 Rita still makes the trek each morning at 5am into town to get the kids to school and park motorcycles outside the Topitop store for a few soles each day. When she saw Lou and I she broke down in tears of heartache and happiness. She knows that when we show up there will be some relief in her family’s desperate existence.

A trip to the grocery store loaded the shelves and meant food for a few days. Rita was eager to share Ruth and Maria’s report cards with us which showed all A’s. She also shared the photos of Ruth’s graduation prom from primary to secondary school. She showed off her new dress with a big smile and insisted that we take one of the pictures since we bought the dress.

As Lou and I walked away tears welled up in our eyes, the youngest child was covered with scabs from Chicken Pox. Their little house floods every time it rains. Six people sleeping on two mats on the floor. The only food in the house was the food we had sent the night before. I can’t imagine what it must be like to live in these conditions. The tiny impact we have made is like a gnat on an elephant’s ass. I have my work cut out for me over the next two weeks.